Cleveland’s near East side neighborhood located at 73rd and St. Clair has been in decline for over 50 years. The 40×90 foot lots in the pocket residential district are sandwiched on three sides by industrial property. The new development provides infill housing to complete the block which is spotted with dilapidation and vacant lots where housing has since been demolished. The neighborhood is due for this kind of resurgence with its proximity to the lake and downtown, which has seen it’s own resurgence over the past decade, not to mention city plans to transform nearby lakefront Gordon Park. The initial phase of development consists of eight lots with four duplexes and four triplex’s that will expand in later phases to twenty eight total lots.

The triplex mass is broken by front balconies, wood trellises and a steel cable system for plants to climb on either side of the structure. Units are designed to have stacked utilities and open floor plans created by removing center walls of all three containers.

Exterior shipping container details are left exposed aside from steel doors removed on each end and replaced with floor to ceiling windows that create cross ventilation. The simple material pallet uses vertical wood siding left to gray naturally. By allocating windows and exterior material finishes to the container ends, where containers are already designed to be open, we were able to both minimize material and engineering costs. The wood along with plantings soften the buildings presence adjacent to the early 20th century houses creating a modern but complimentary aesthetic.

The two unit types add diversity, each with unique rear stairs, carports, and fences. The triplex’s carport utilizes a broken fence like poured concrete structure with vertical openings on each side. The egress stair is clad in poly-carbonate filing the space with natural daylight during the day and allowing internal structure to be visible but blurred while glowing at night. The duplex has an open steel frame carport with black painted pine fence that staggers its composition by rotating boards between posts. This creates an open feeling while providing privacy and a textured perimeter. The units nestle in the neighborhood just enough to create a residential feel while hearkening back to Cleveland's industrial past. They reuse old containers which are cheap and in abundance and utilize modular construction methods that are cost effective and allow for offsite construction during winter months.

Overall massings on the site are intentionally staggered between unit types, never having two three story, or two two story units adjacent to each other. Color is intended to diversify the aesthetic of the housing. It brightens the neighborhood and creates a strong unifying identity of housing peppered among the context. 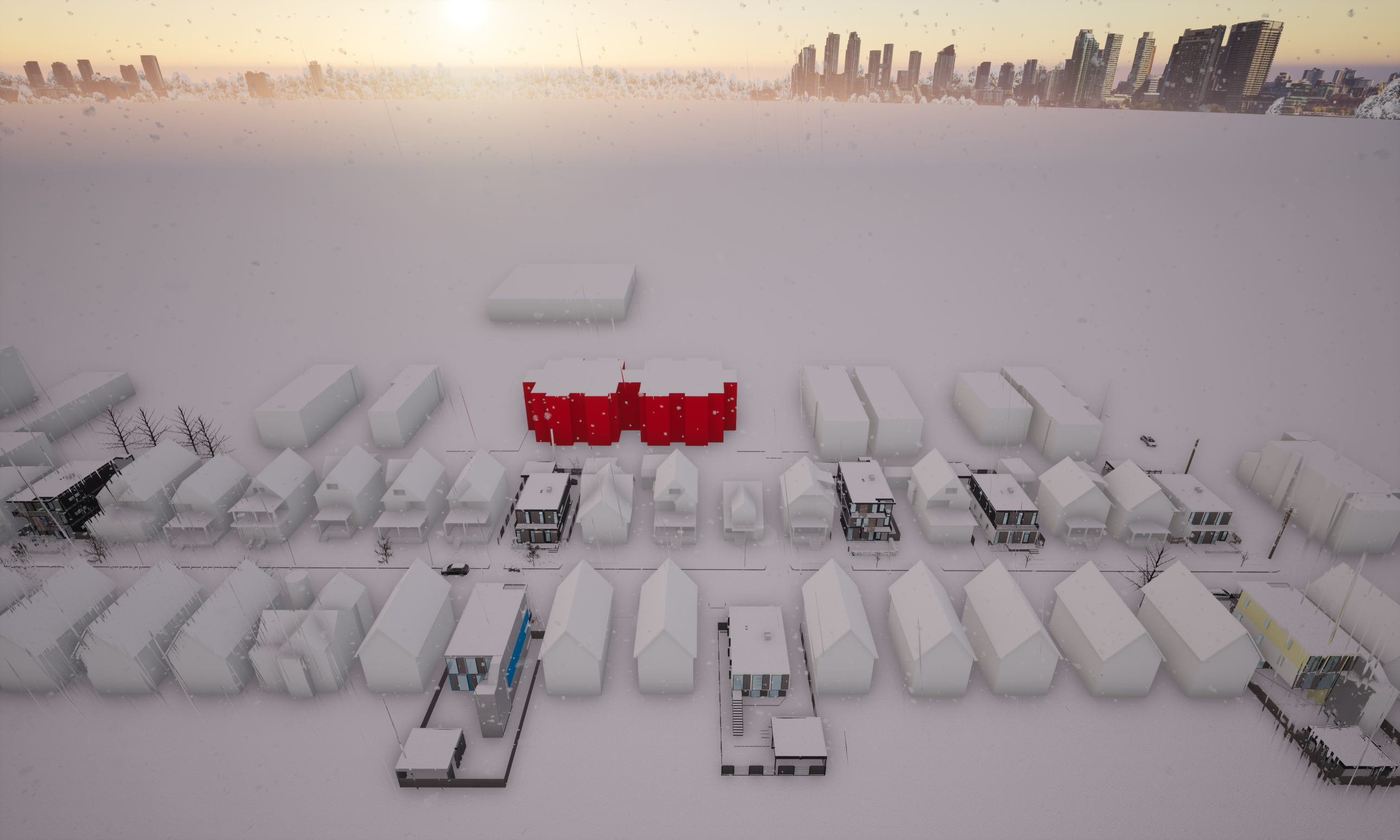 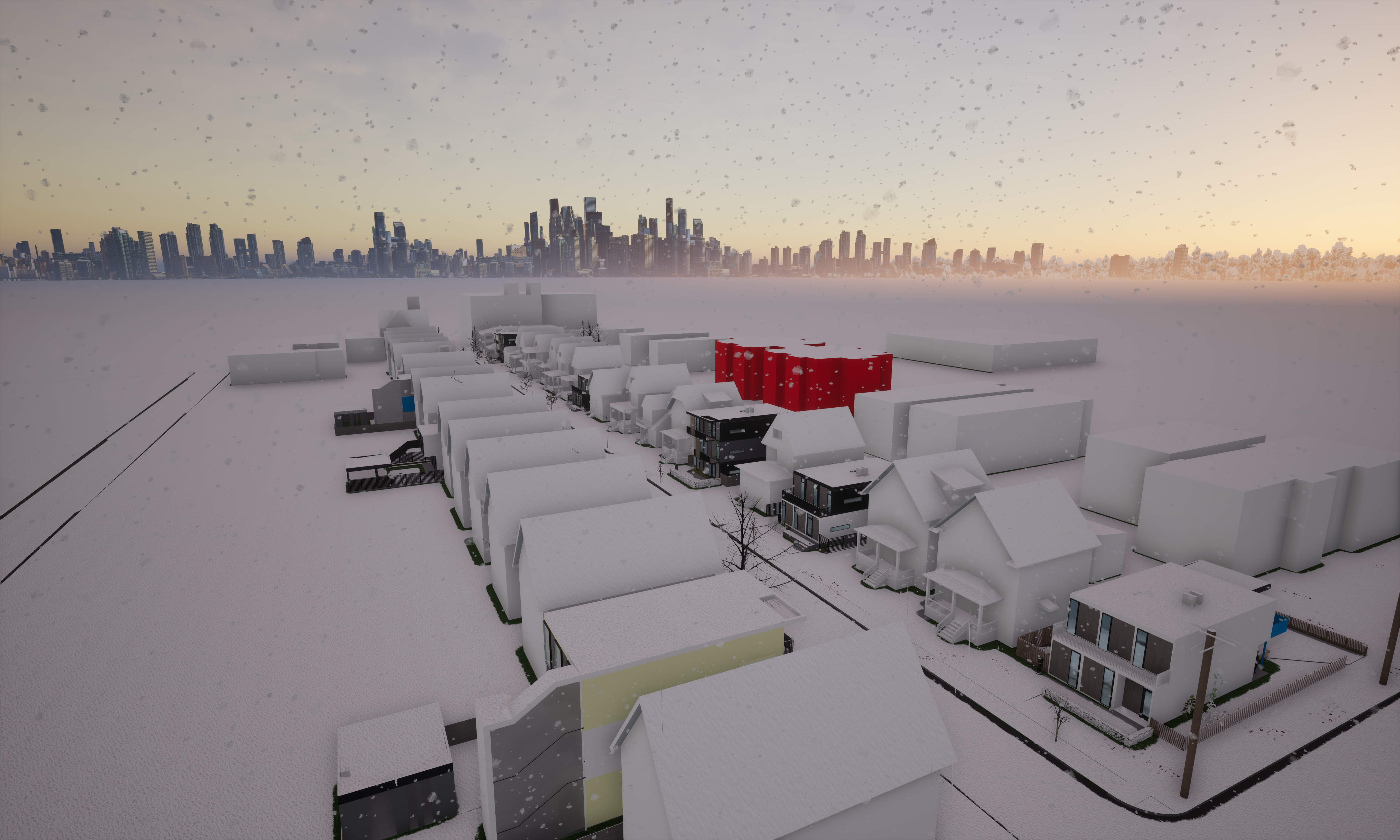 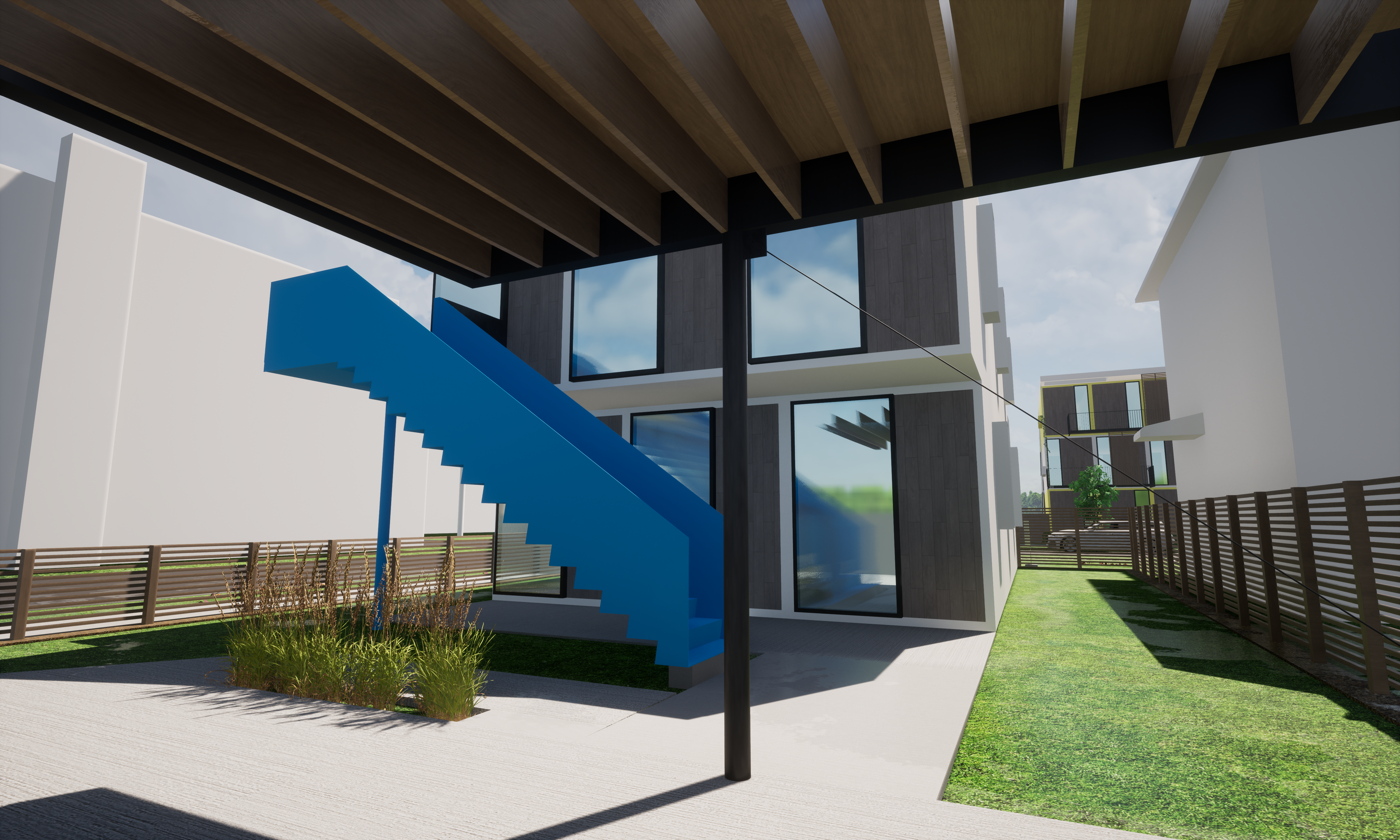 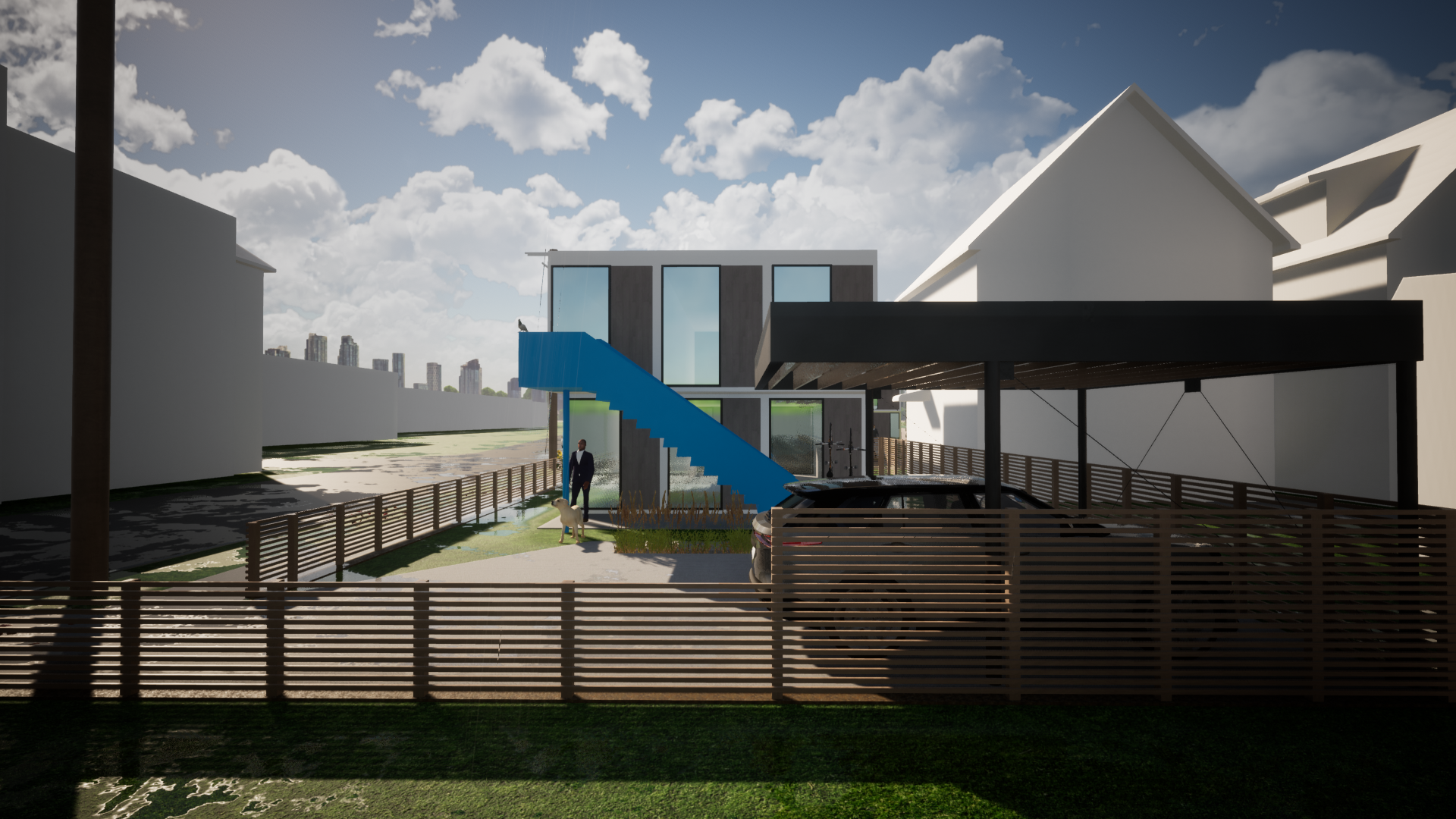 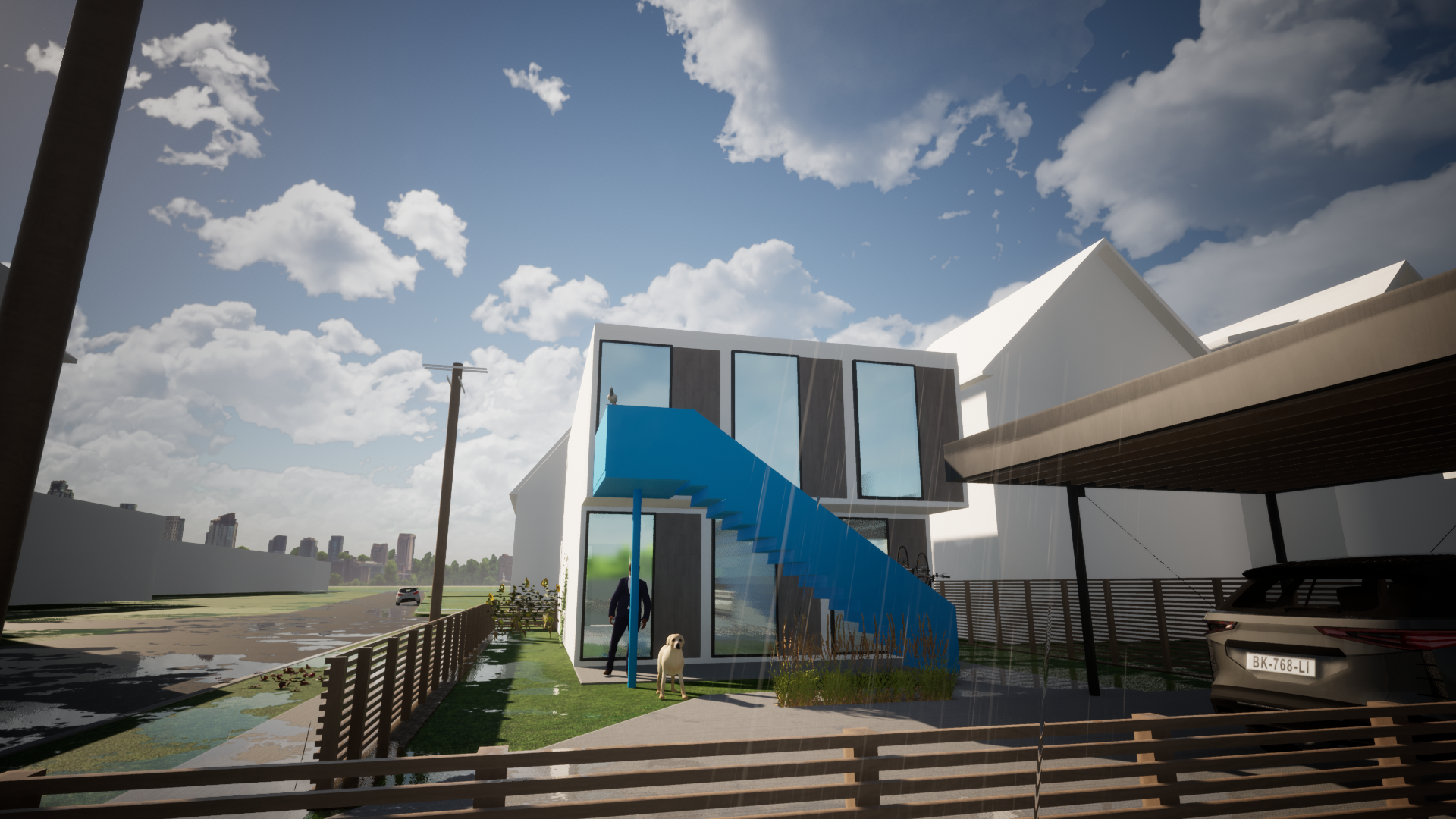 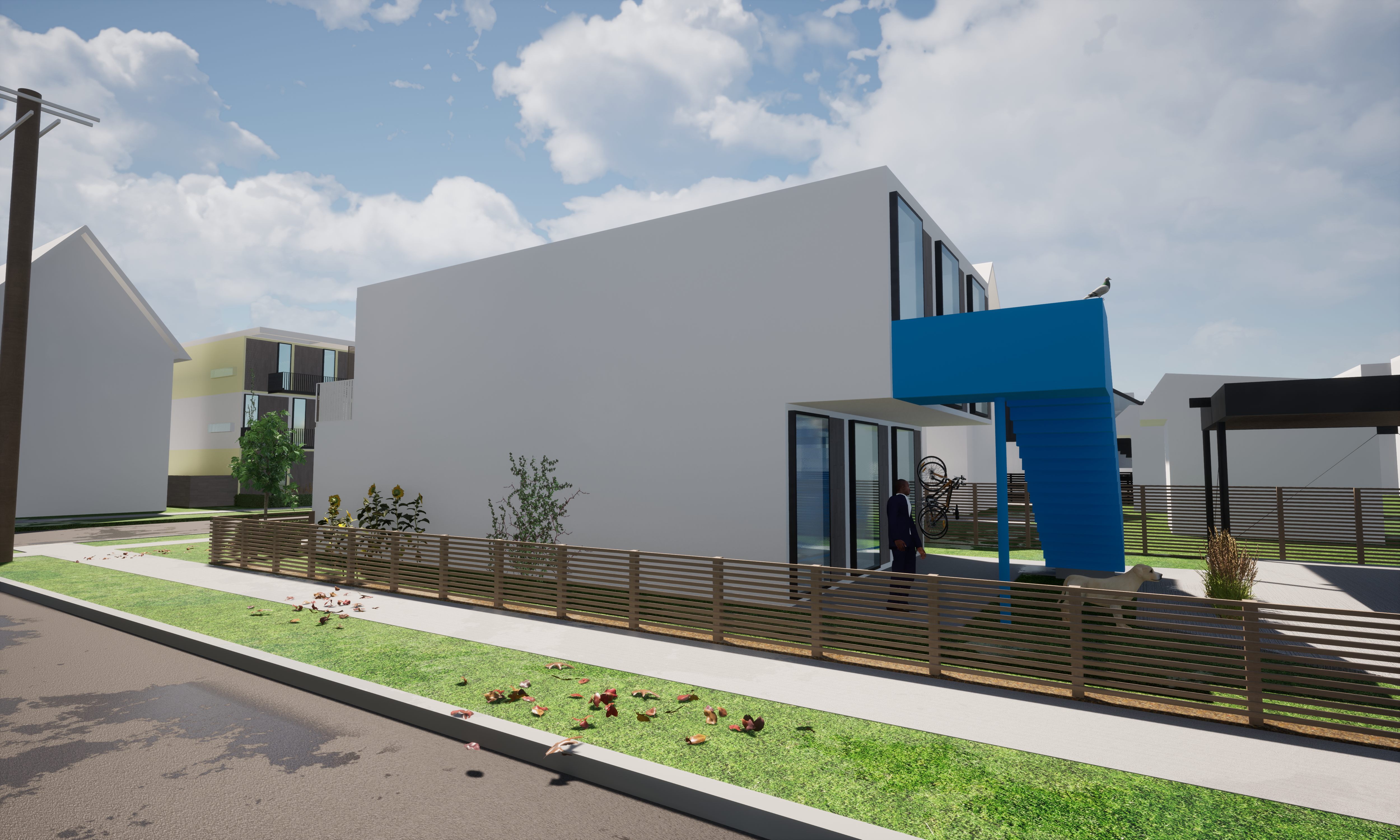 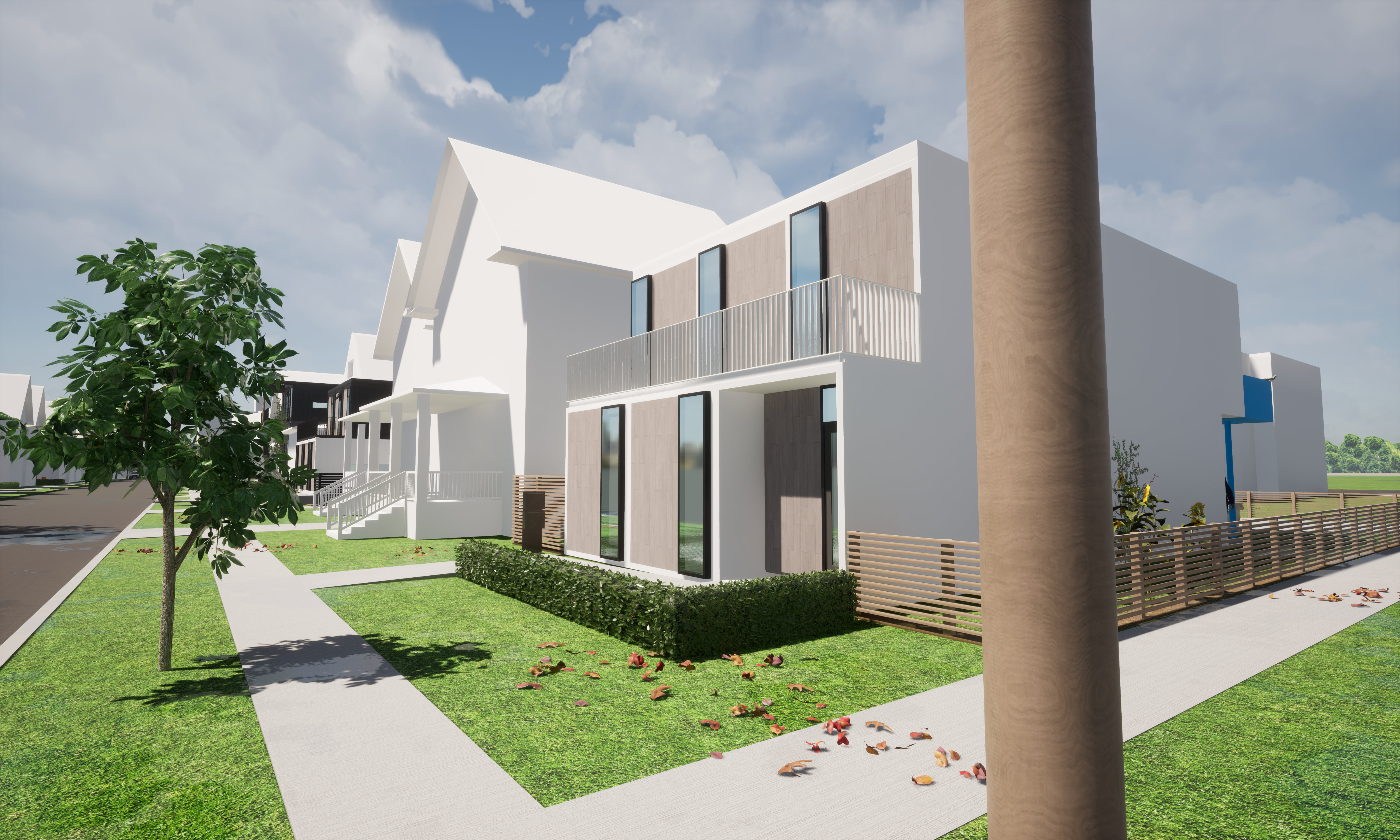 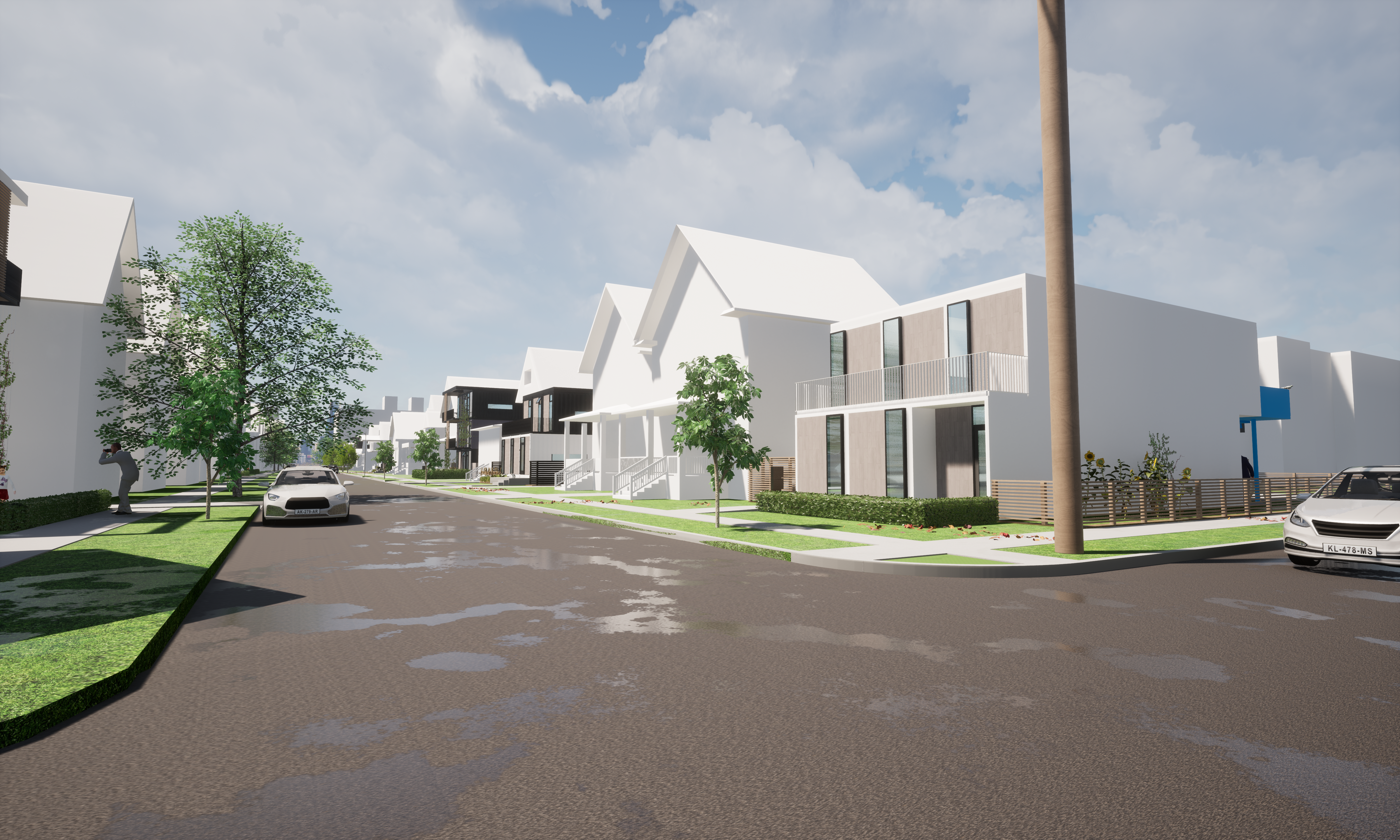 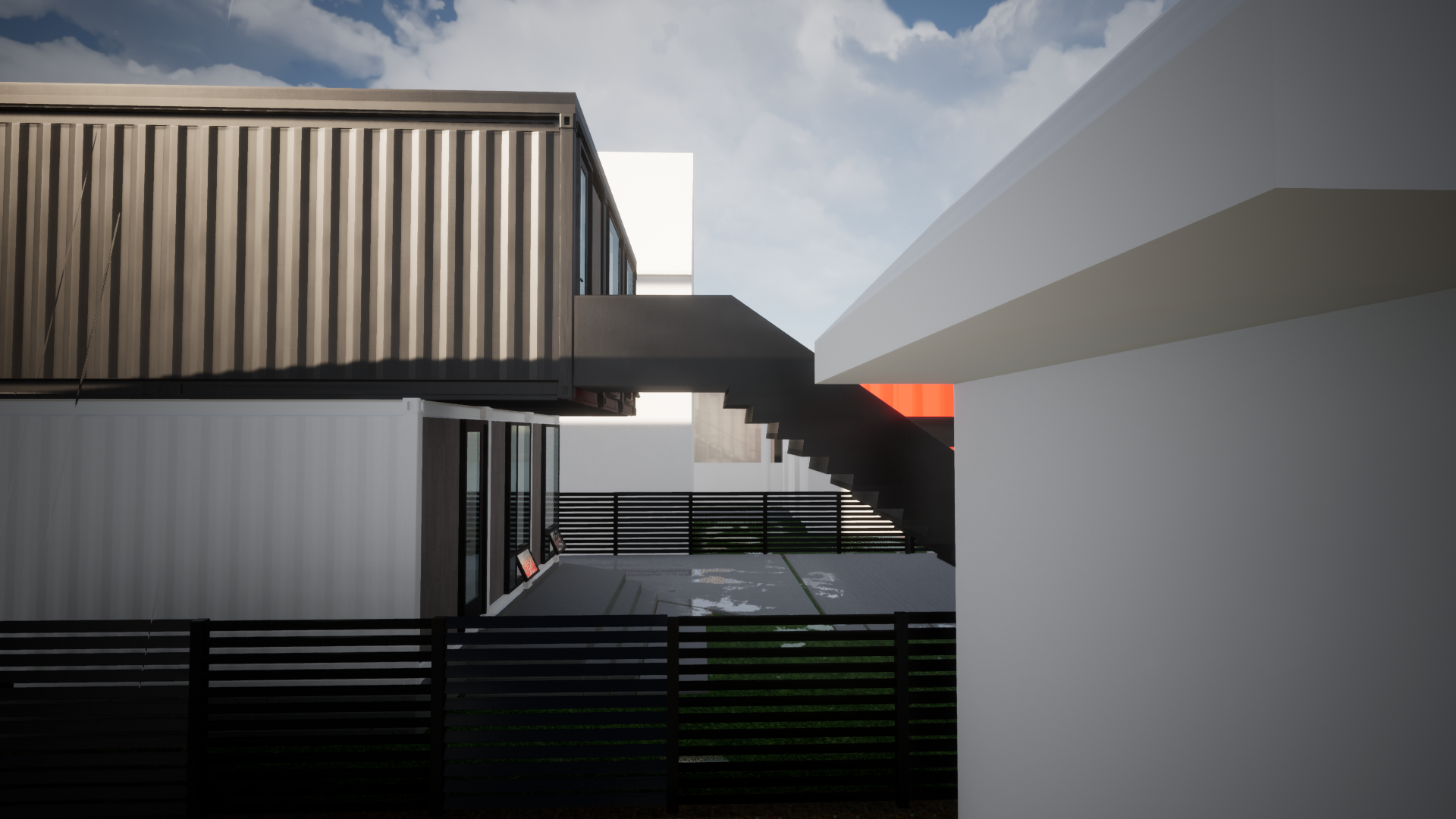 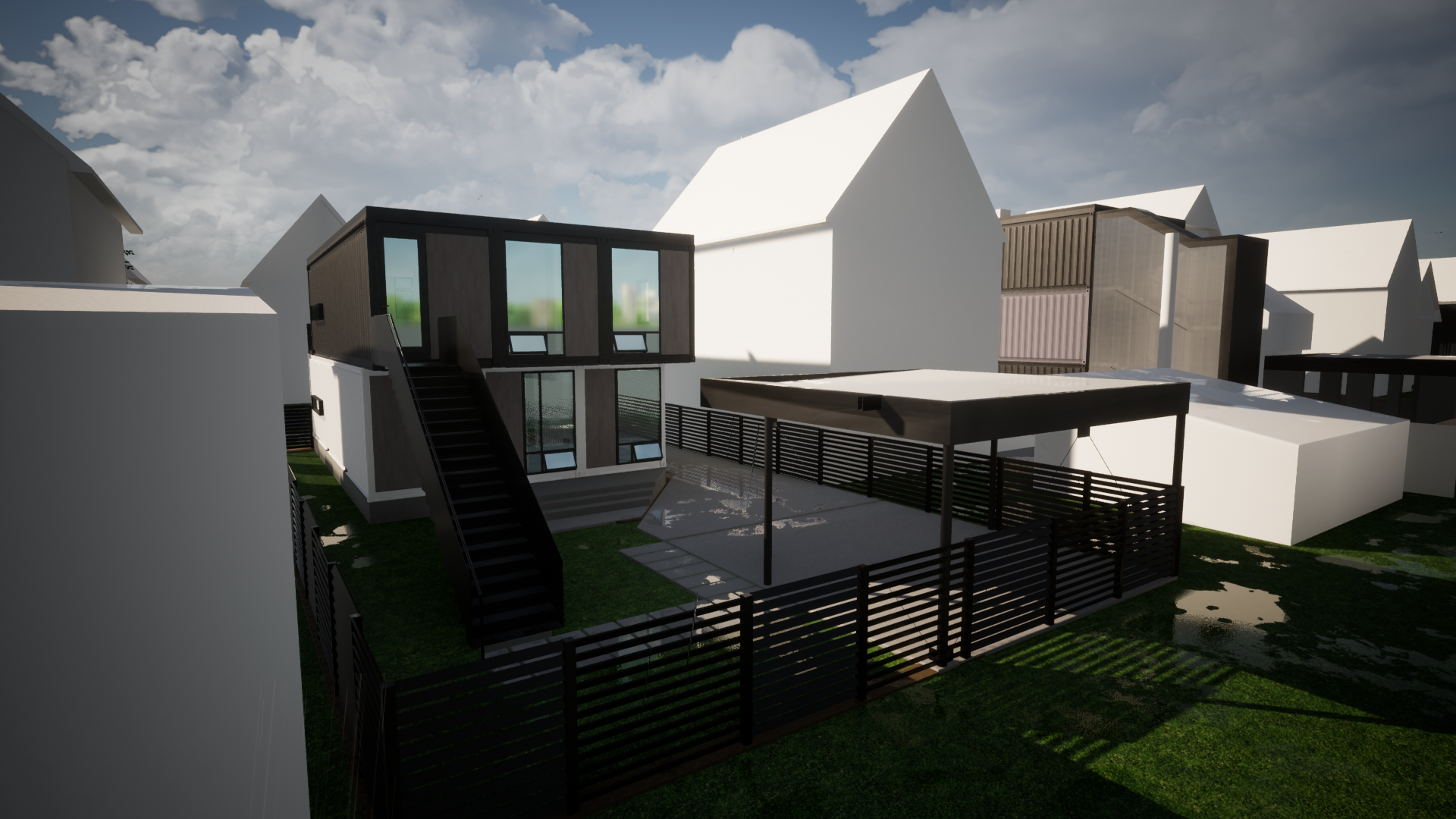 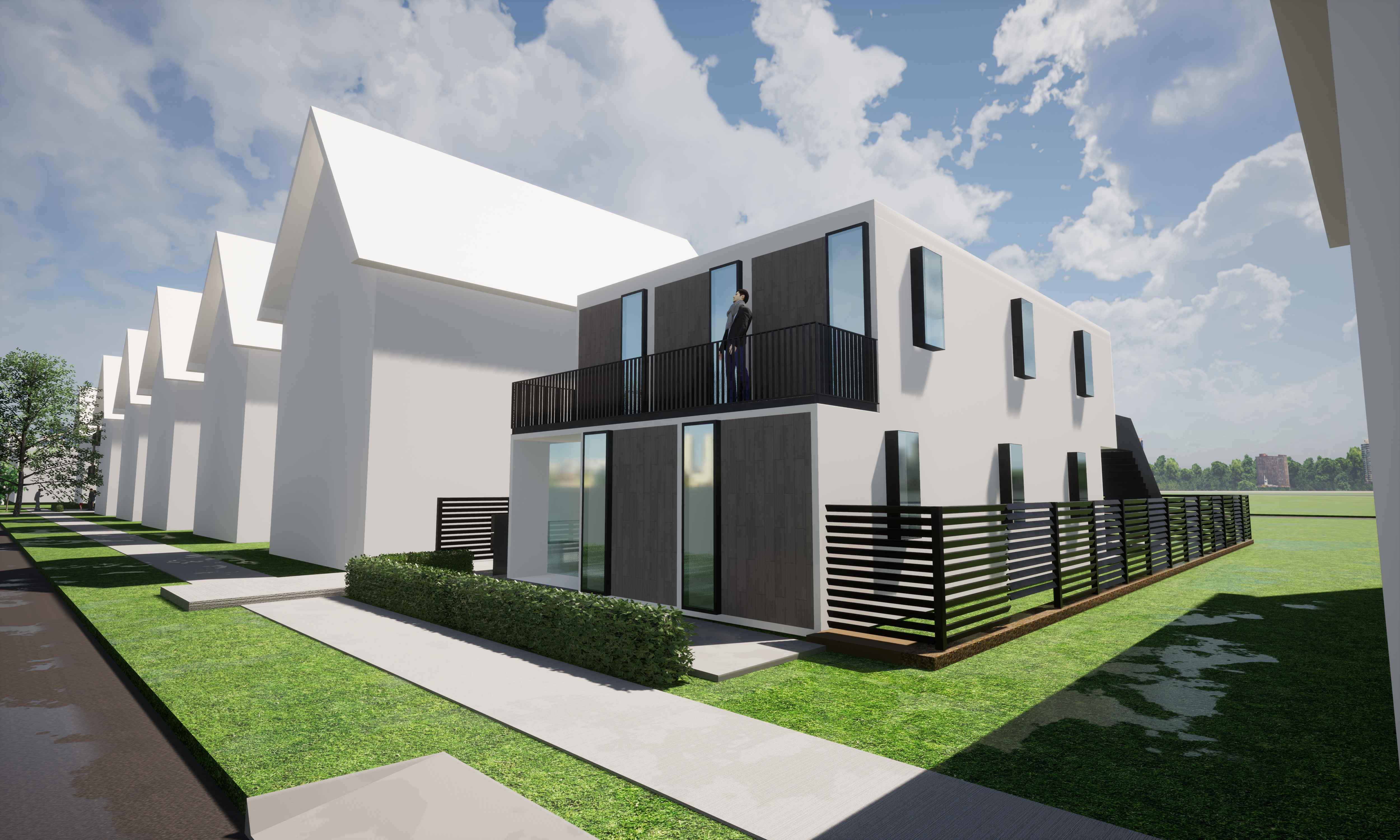 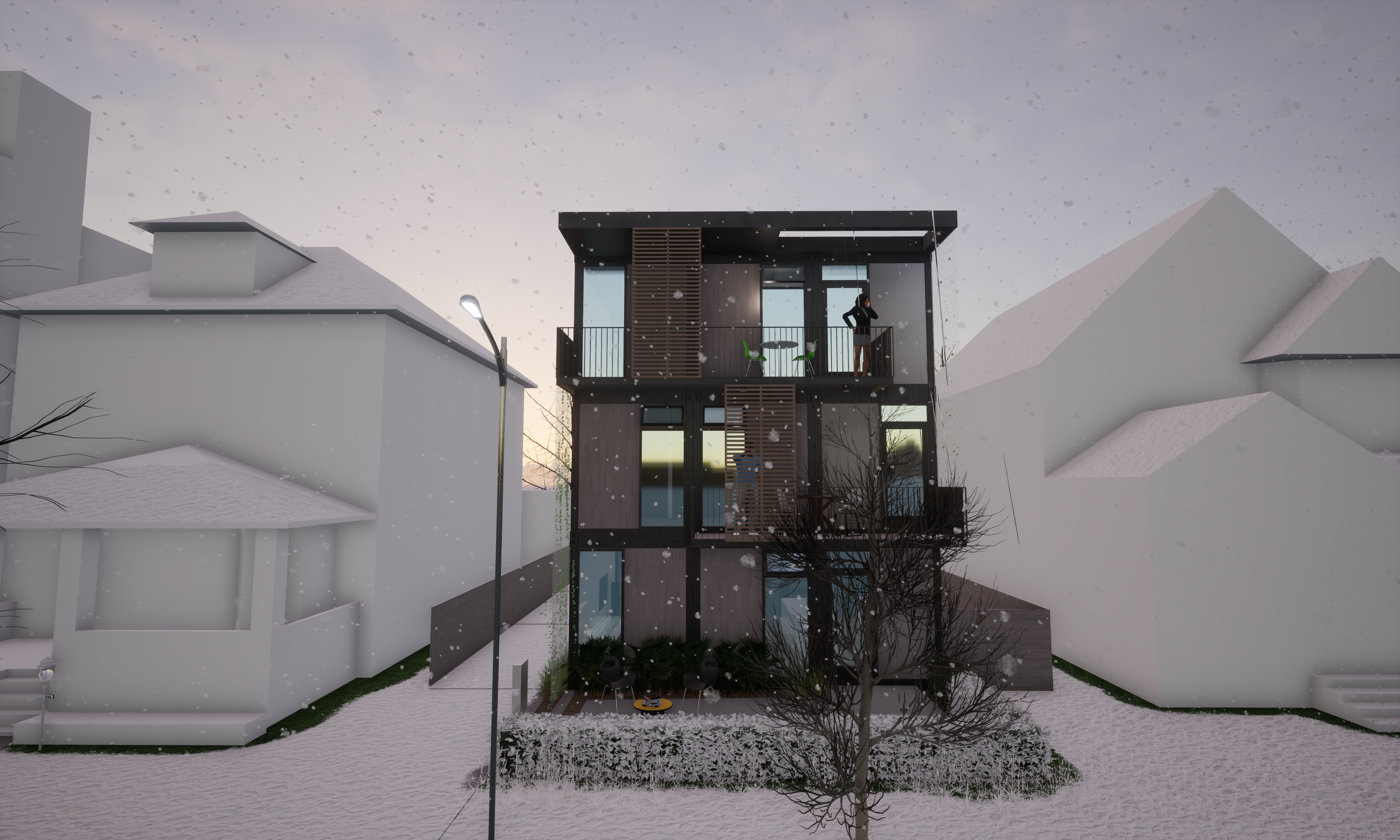 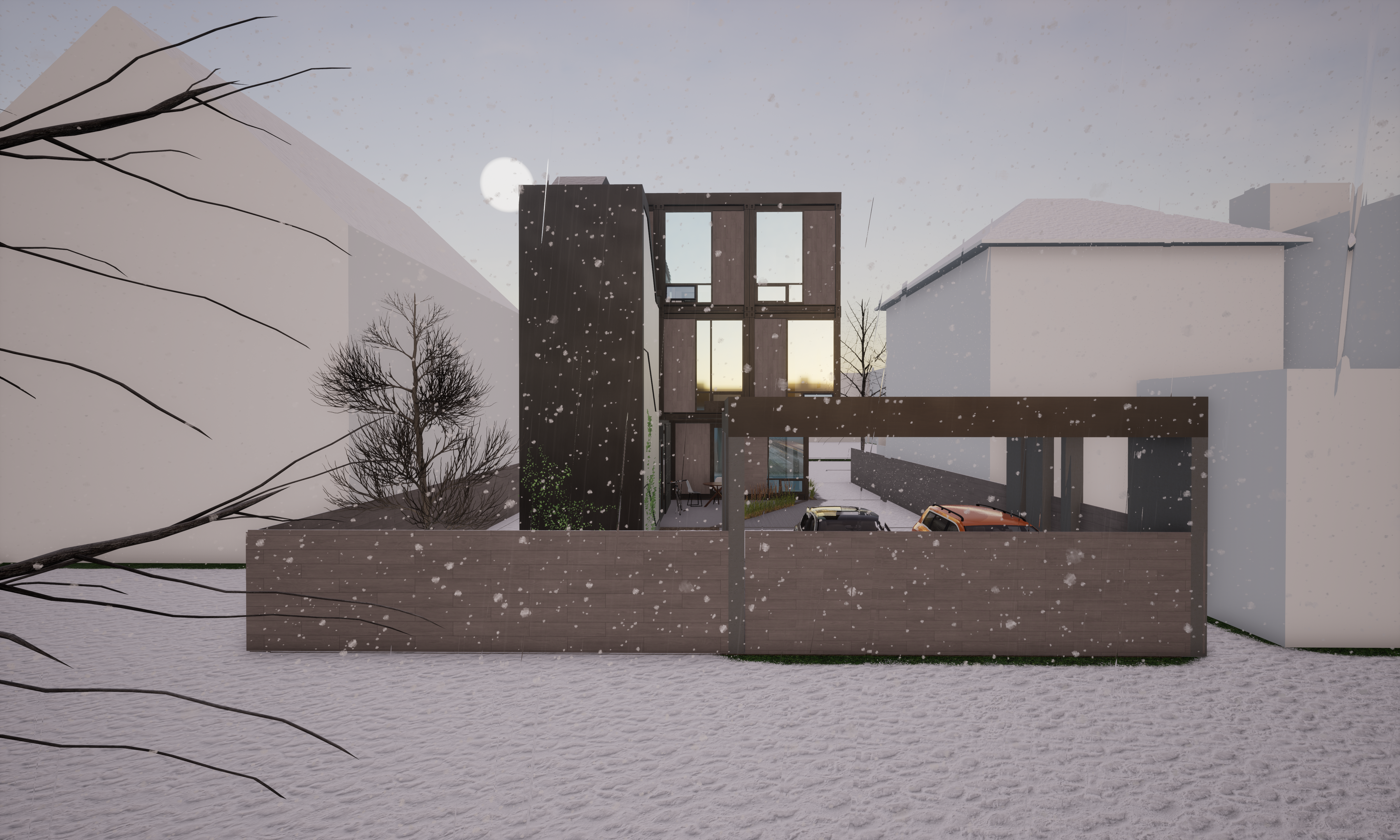 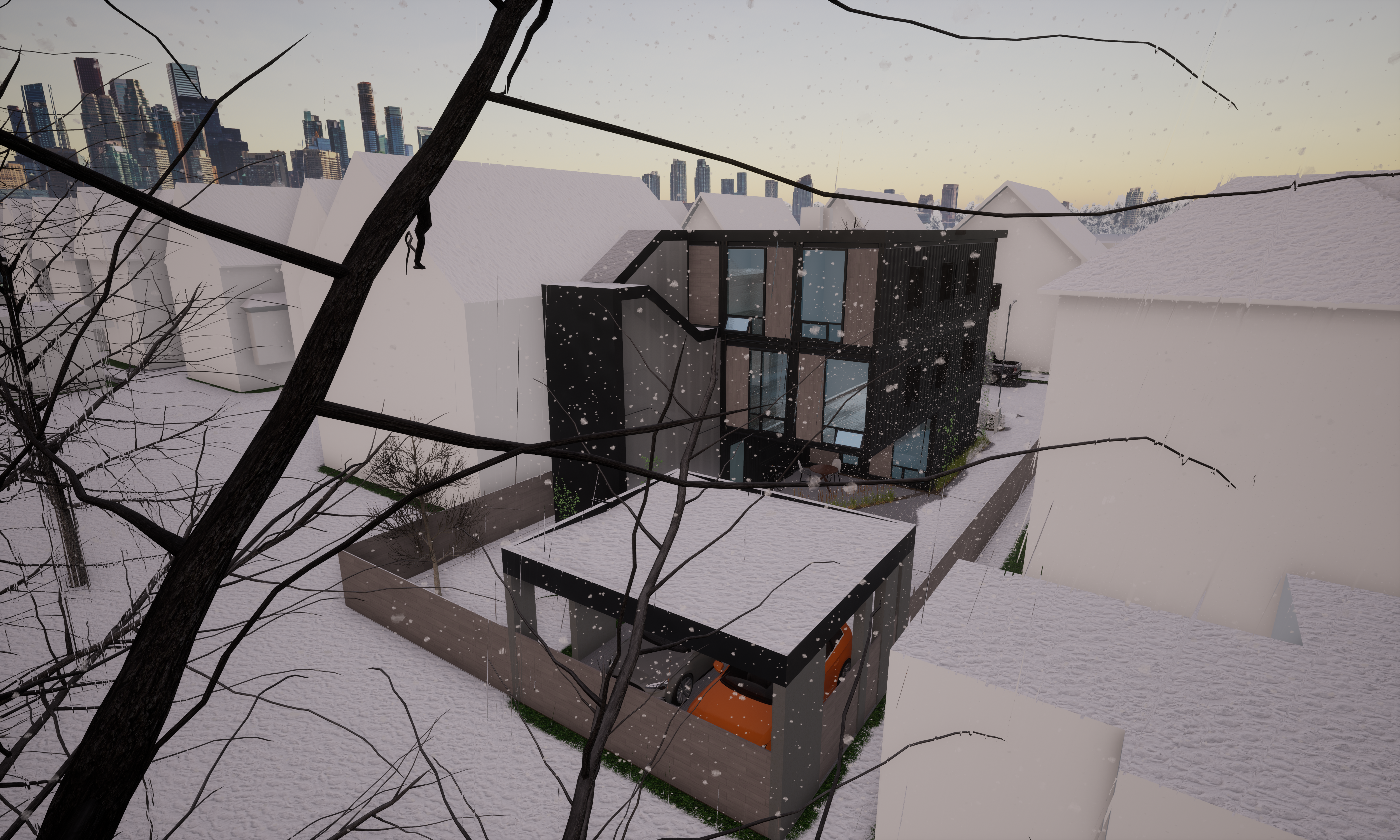 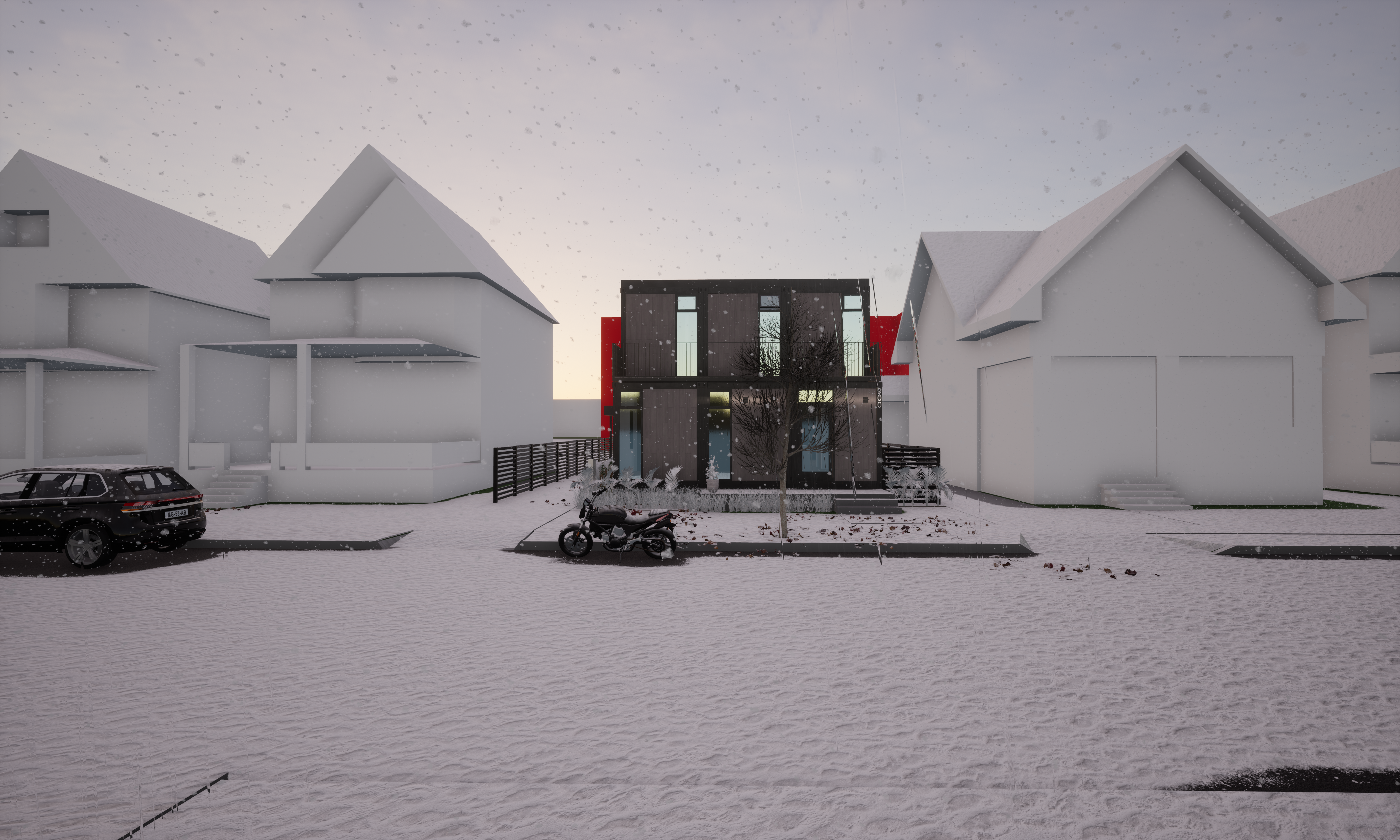 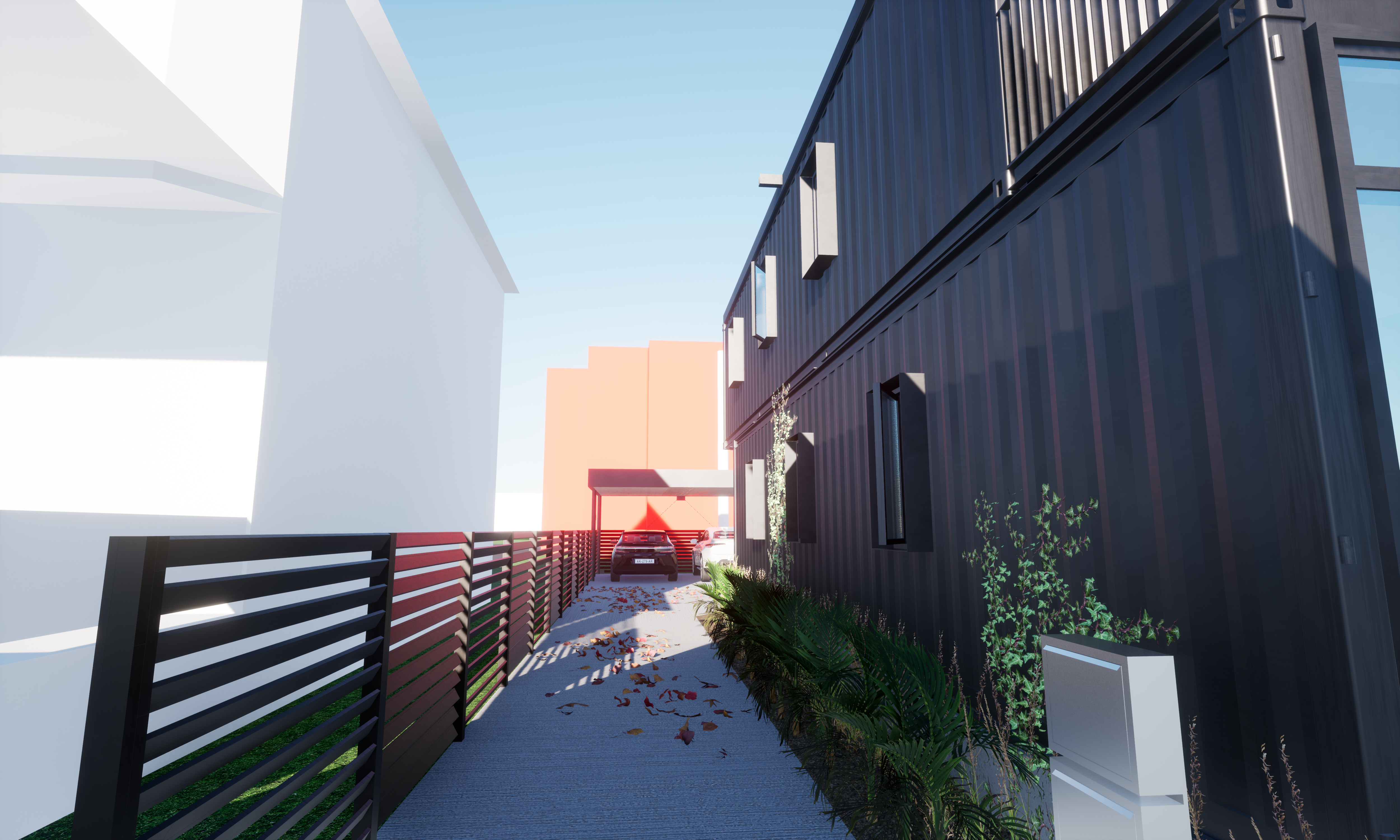 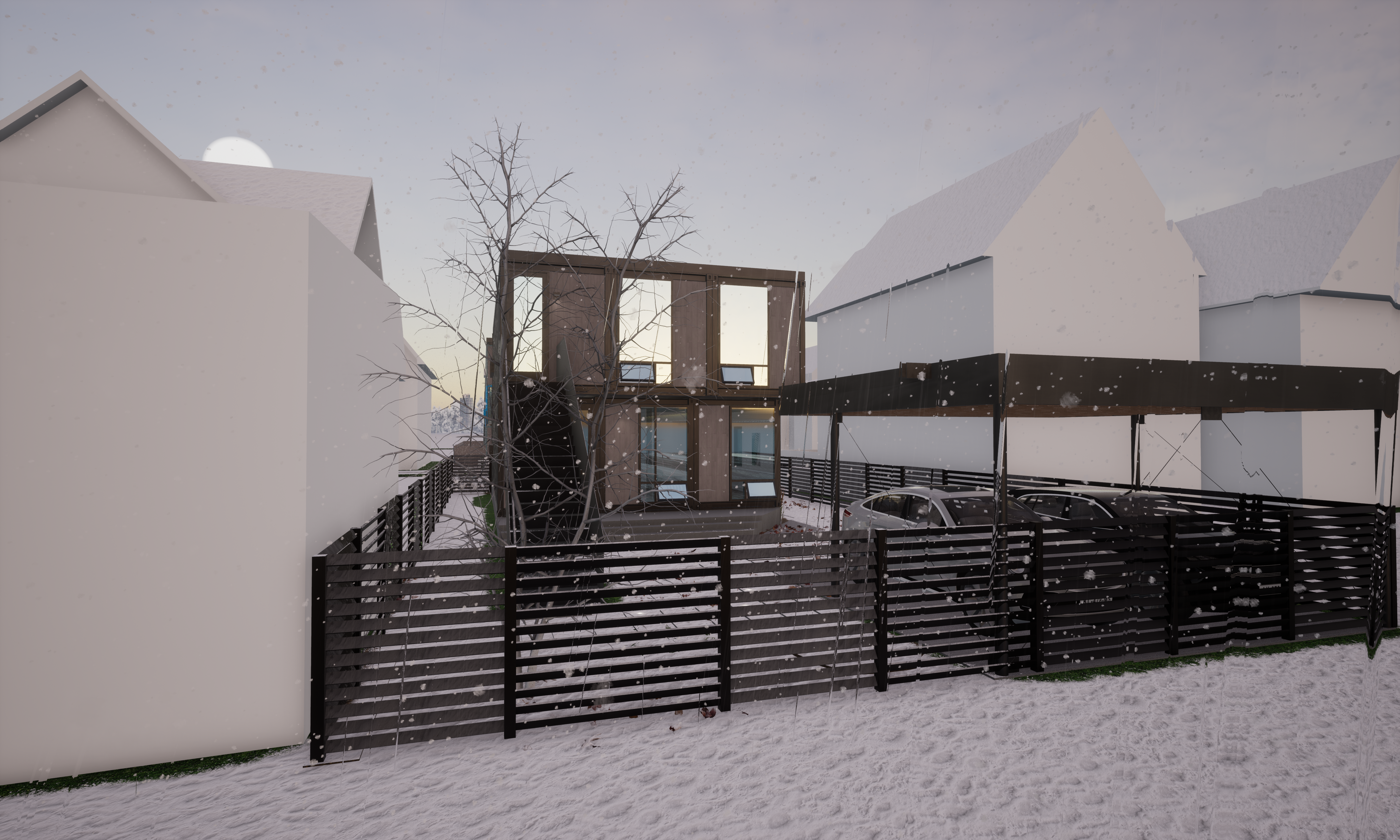 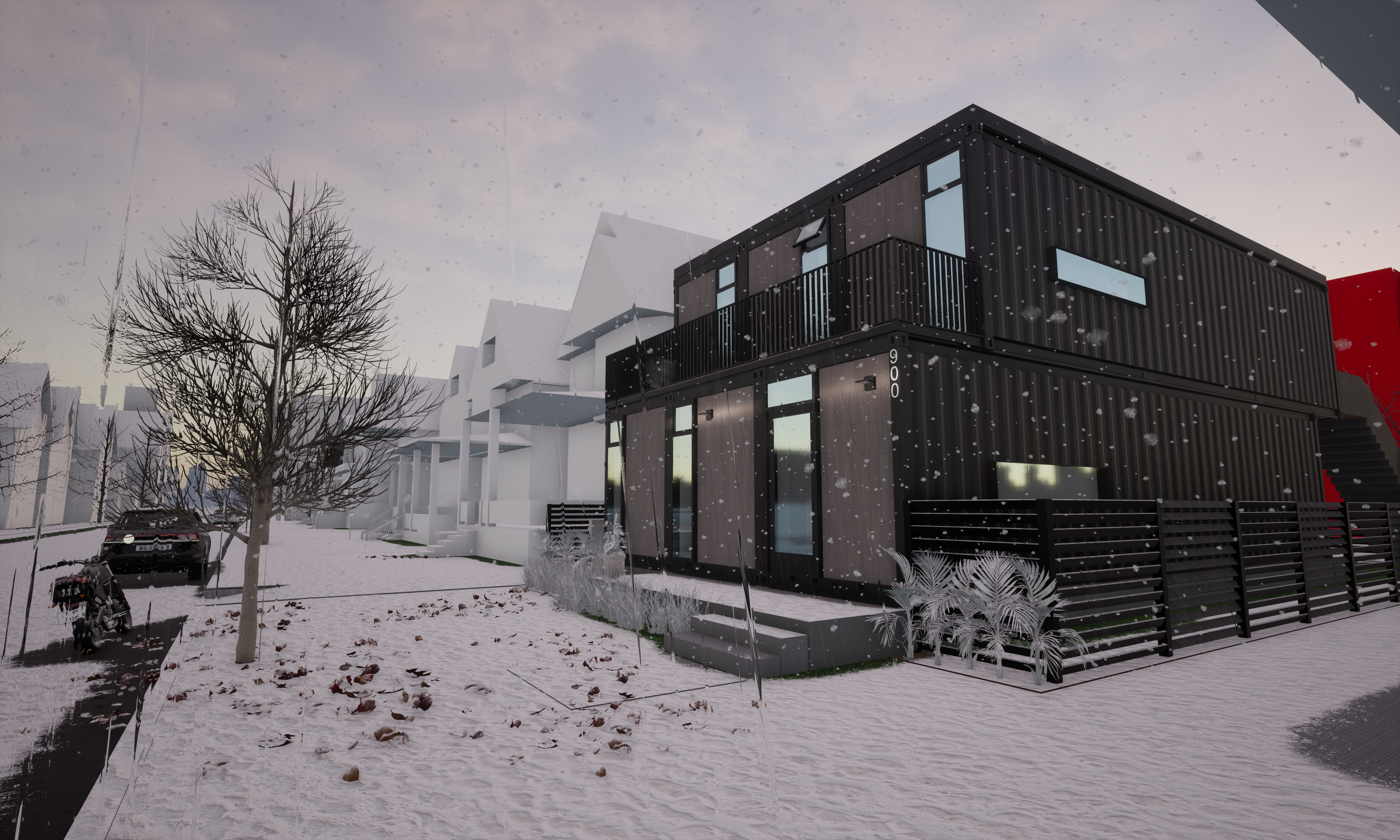 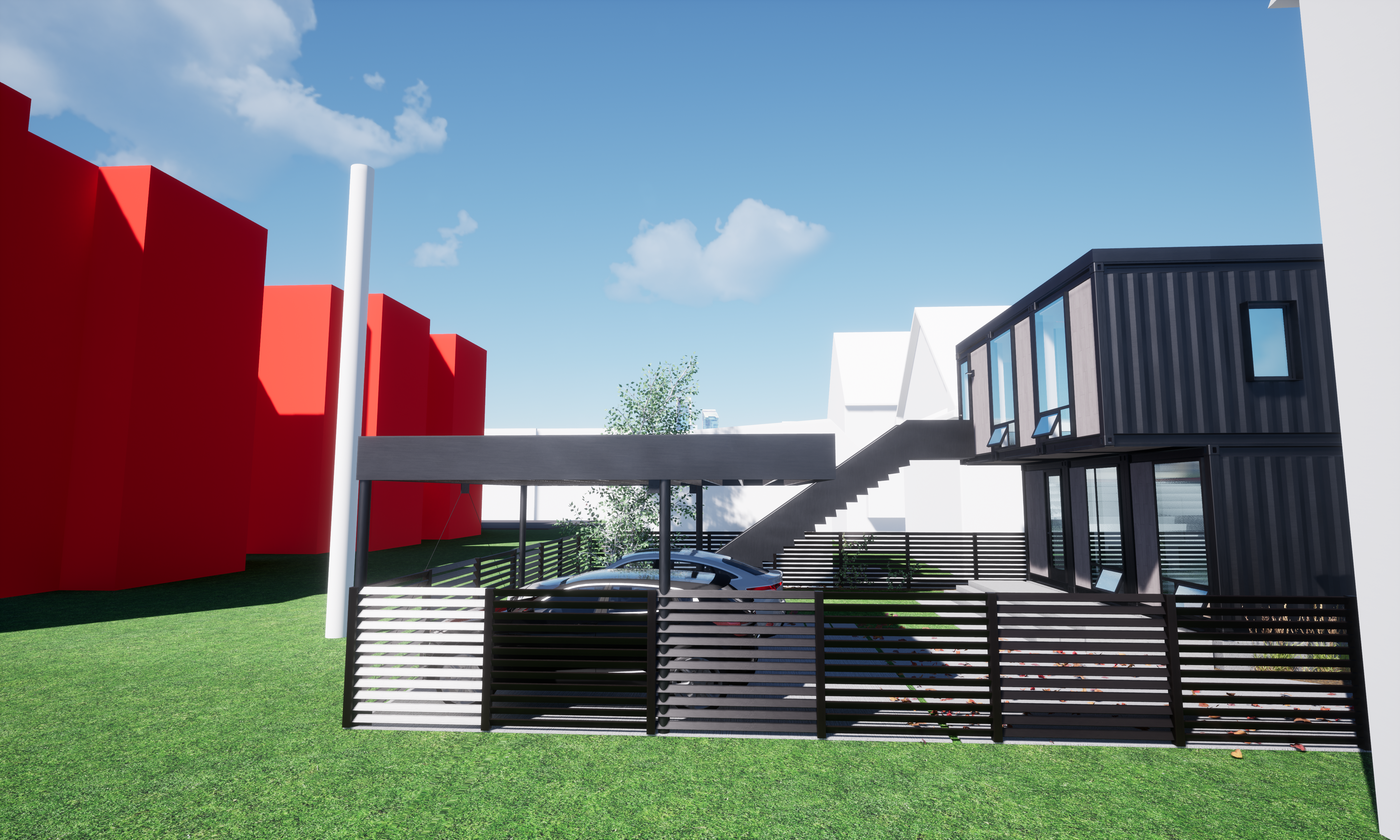 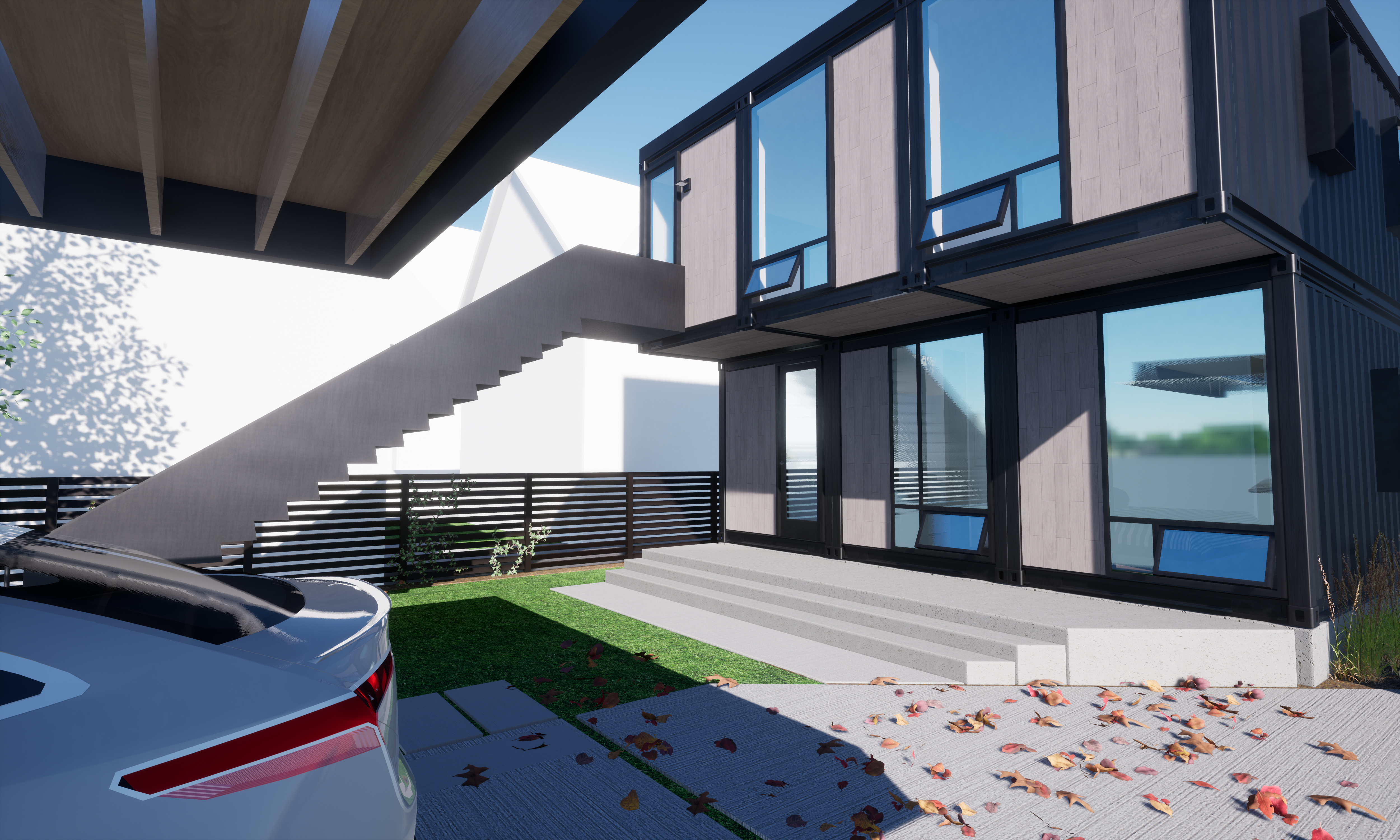 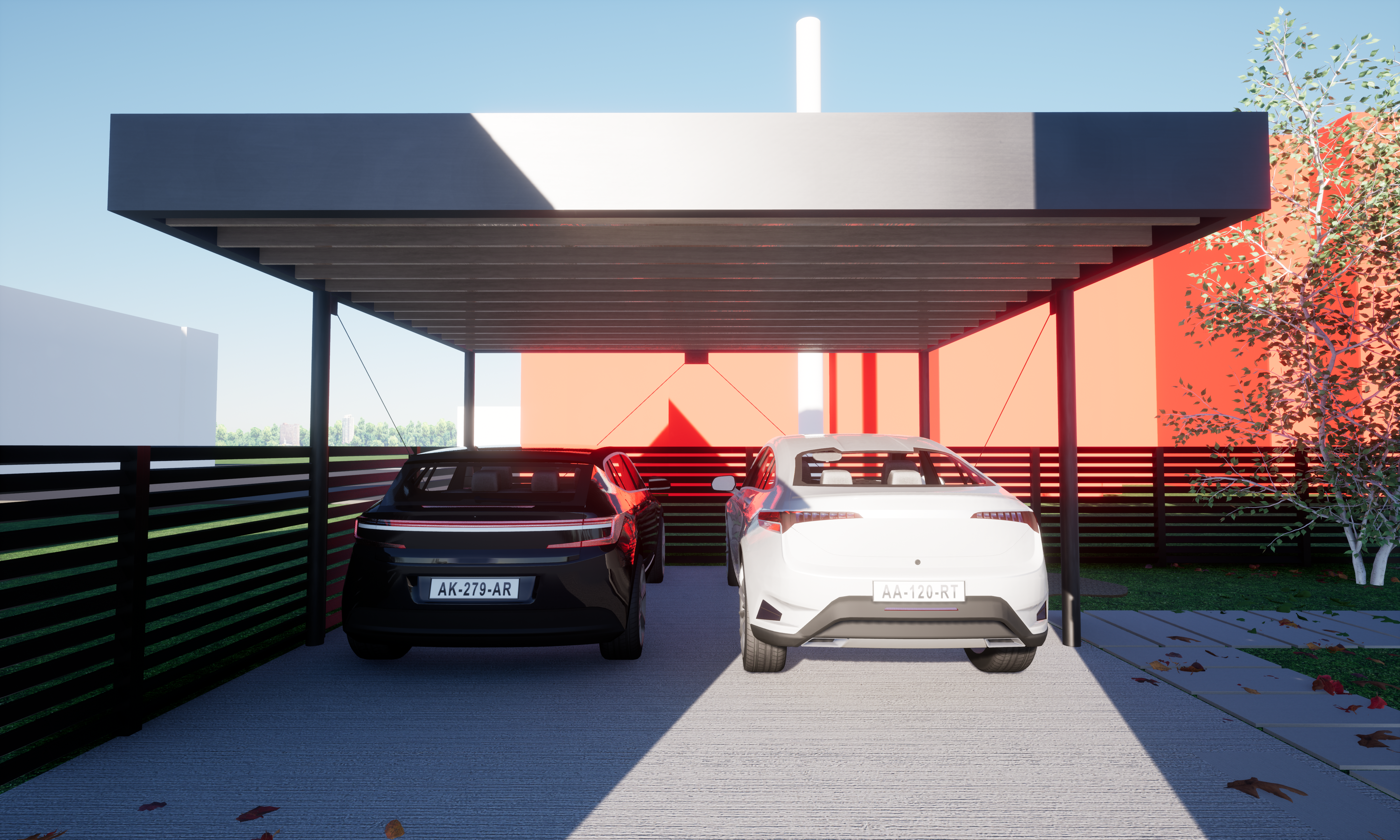 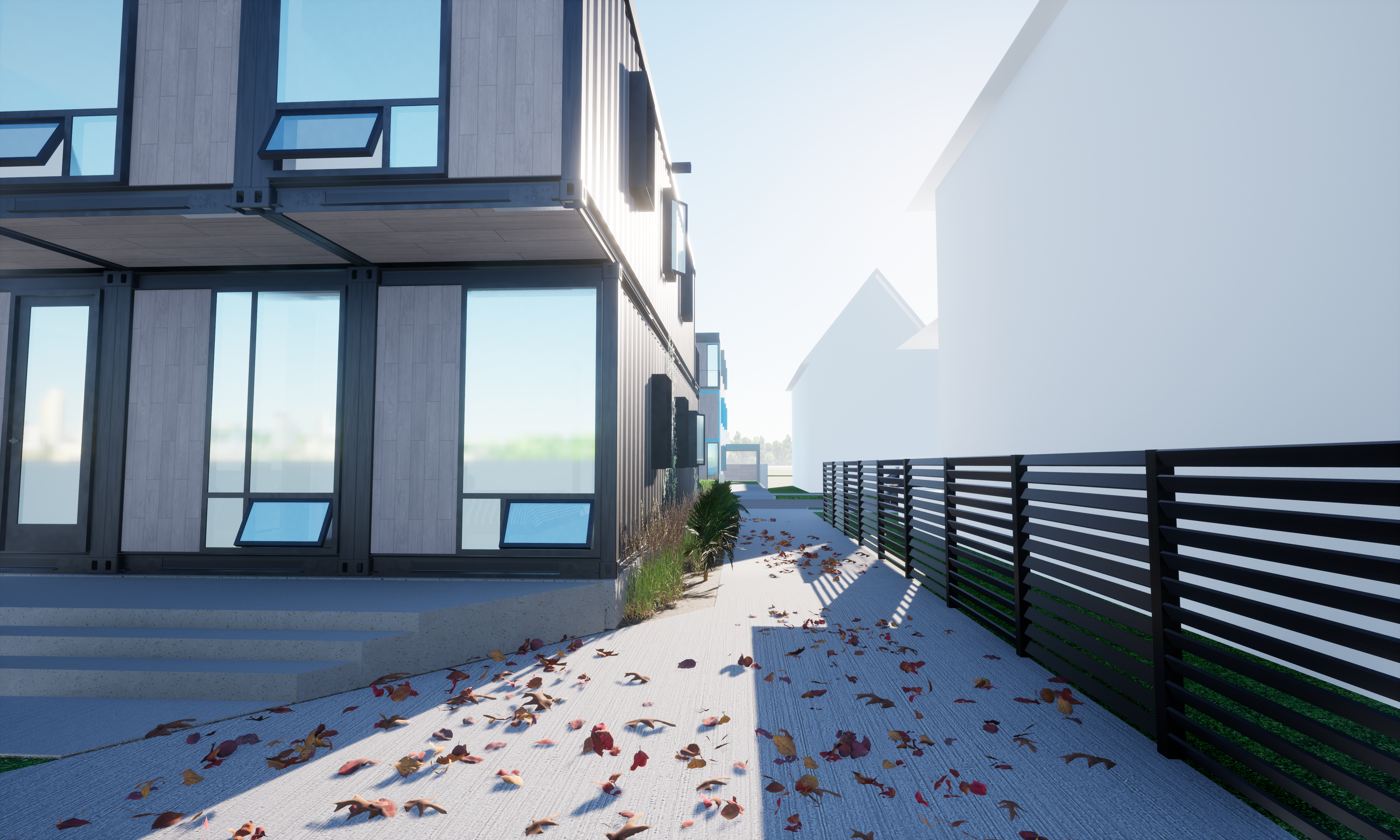 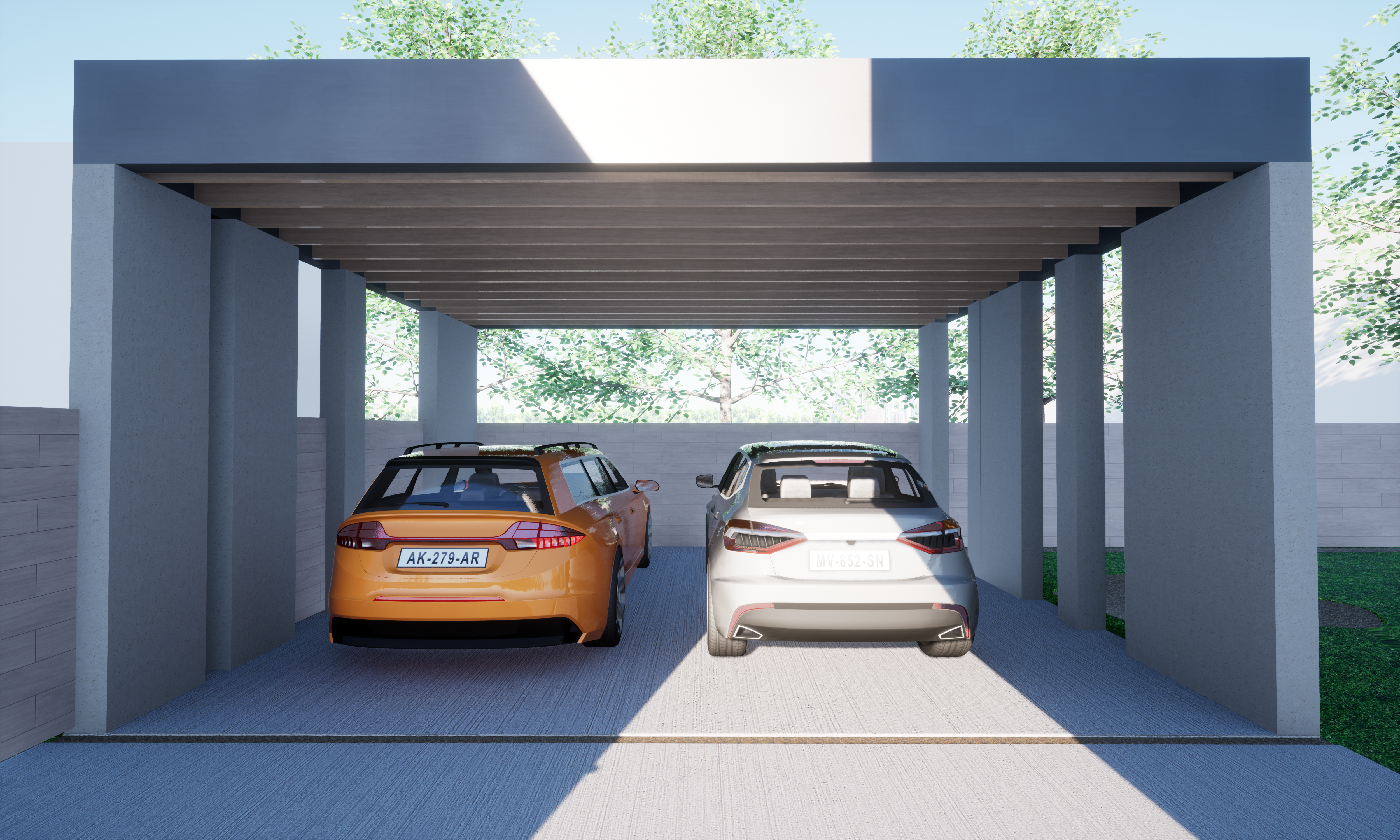 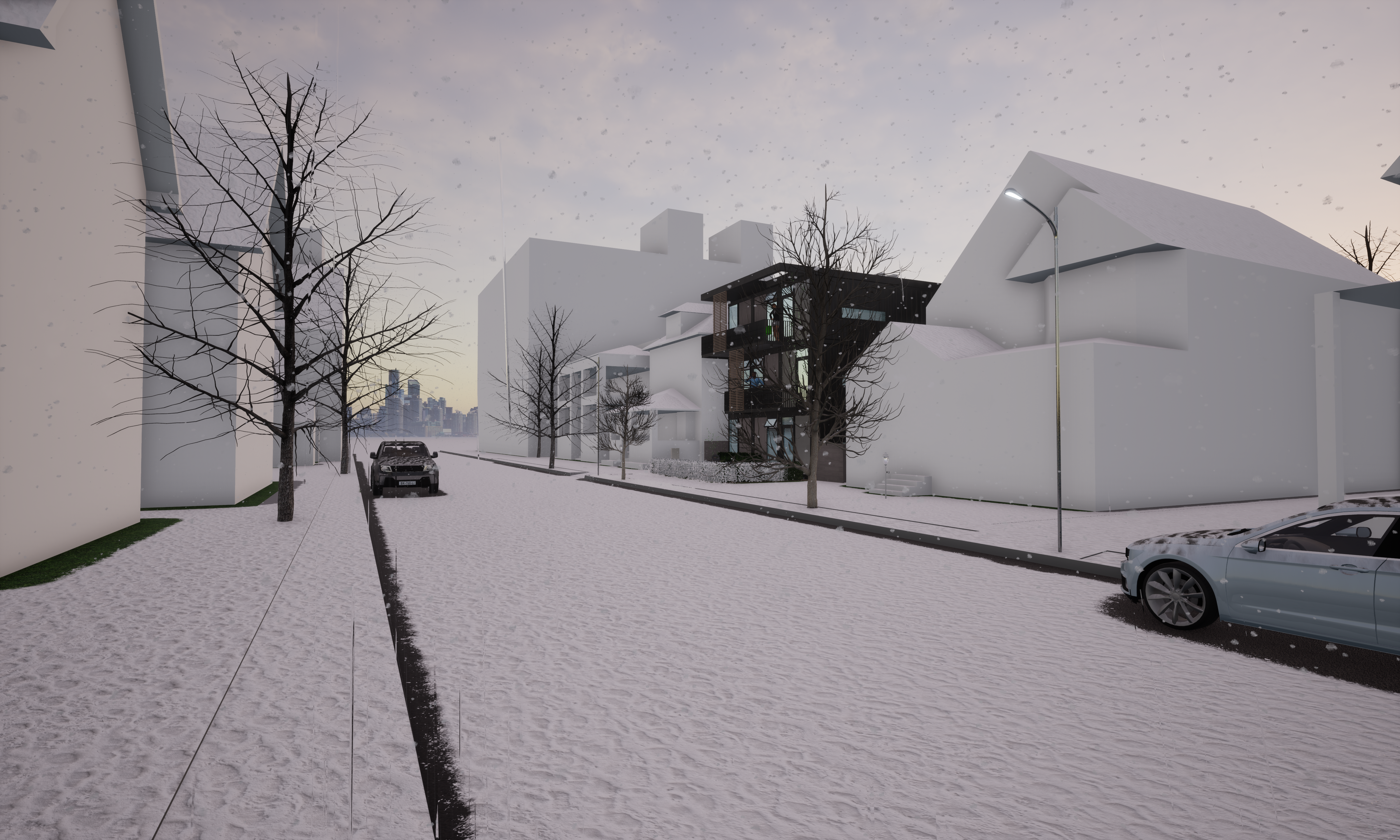 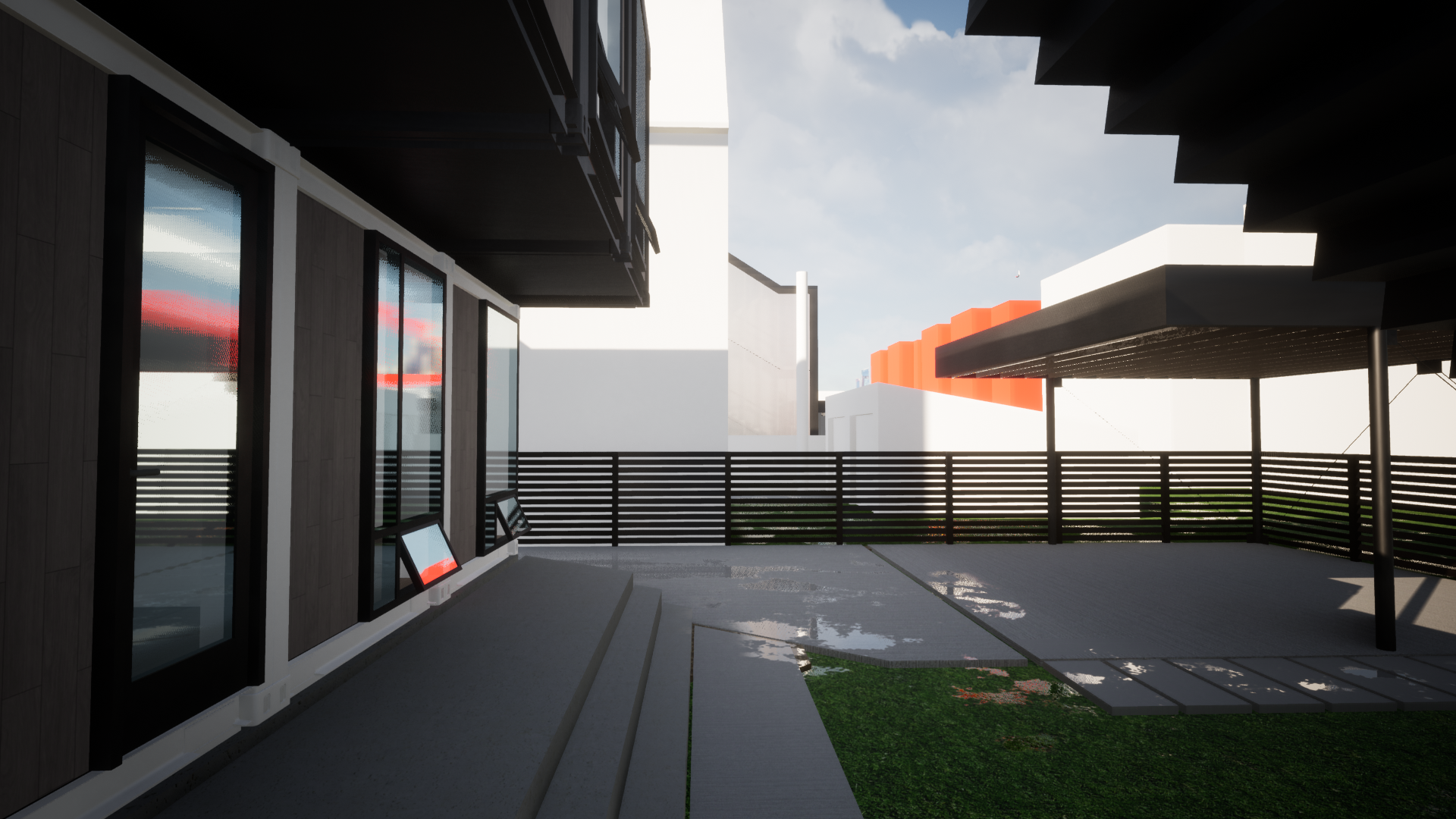